Allison has had much experience with all aspects of music-making and her support for festival work has resulted in a great many festivals overseas. She was a prime mover in ensuring the start of the new festival in Raleigh, USA and has held fundraisers which have supported festivals in the Far East. Allison taught at Greshams in Norfolk, where she specialised in Music Theatre.. Her workshops include French for Singers, Musical Theatre performances and workshops for students with special needs. She is now based in Gloucestershire. 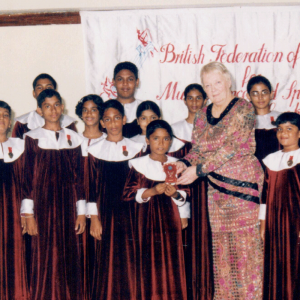 Allison was awarded several contracts for BBC radio for schools. The programme was Music Club, produced by Albert Chatterley for teenage students. It was presented by Gary Taylor, a member of a pop band called The Herd. A weekly programme, it had a good following across the UK. 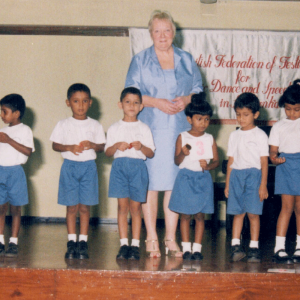 Allison adjudicates most music classes, but specialises in piano and voice. Her work as an examiner and adjudicator takes her to most parts of England and Wales and to Scotland, Northern Ireland, Eire, Hong Kong (6 visits) and Sri Lanka (7 visits). She was also invited to the USA where she adjudicated at the Sir Walter Raleigh Festival in Raleigh, North Carolina. Her examining has taken her to Greece, Singapore, Malaysia, Sabah and Sarawak.

As a proficient and experienced public speaker, Allison’s work includes public speaking, both teaching and performing, with a special interest in poetry readings and performances.  She also lectures and performs, has talked to WI’s in Norfolk and reads the lesson in St. Patrick’s church in Brockworth, Gloucestershire.

She is a mezzo-soprano, singing solo and ensemble and has performed with the Norfolk Symphony Orchestra.

She was awarded the Bronze medal for her Licentiate of the Guildhall School of Music and Drama.

She has attended several royal receptions and has had the pleasure of meeting Her Majesty The Queen and the Duke of Edinburgh at St James’s Palace and The Count and Countess of Wessex amongst many others. 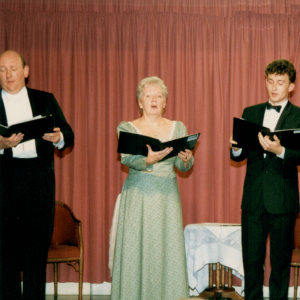 Allison has a great many interests, her latest venture is writing a novel based in Camden and concerns saint Pancras.  She also speaks fluent French and German, with some Spanish and Italian.

She reached the final of The Weakest Link and also took part in Pointless with her grandson, Ben and reached the head-to-head.  Much laughter when she named a winter Olympic competitor as Burt Kwok.

Allison has a great many hobbies including music (of course!), Radio 6, all technical and digital gadgets, including her wonderful iWatch, reading and she also has two secret loves in Alan Bennett and Pavarotti.

She has an amazing family of children and grandchildren. Her husband, Anthony died in August 2016 and is greatly missed by them all.

A celebration of the Golden Wedding of Anthony and Allison in the cathedral church of St John the Baptist, Norwich

Psalm 23, set to music by Schubert, sung in German by (left to right) Dominique, Allison, Josephine and Rachel